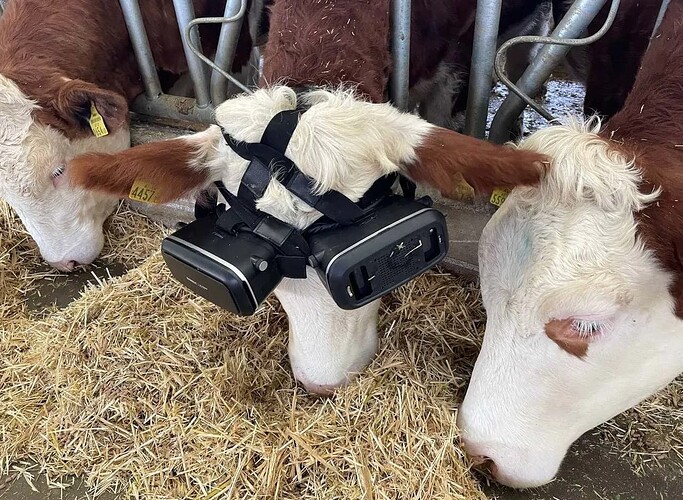 The experiment took place on the RusMoloko farm in Moscow’s Ramensky district and was authorized by the Moscow government, and they also released a statement.

The experiment was about reducing anxiety so cows can be physically and emotionally healthy and increase milk.

A Russian Farmer who lives in Moscow fitted VR to its cow head and performed different types of experiments. One of his essential experiments was a unique summer field simulation program using a Virtual Reality kit.

After positive results from the experiment, he got the attention of the Russian Moscow Ministry of Agriculture and Food. The ministry analyzed his experiment and named it “The overall emotional mood of the herd.”

The prominent points in the experiment are:

“Different countries show a calm atmosphere of dairy including the quantity, and sometimes increase the quality of milk which helps the market.”

The Turkish farmer was impressed by the Russian experiment and followed his pattern.

Izzet Koçak started his cattle business in 2018. He had 180 cattle when he began his experiment. He started playing classical music as the Russian did with opera to calm his cows and reduce their anxiety. He then changes their food to make them healthy (to reduce emissions). Having said that, Izzet also started using virtual reality. He placed VR kits on two cows. He quoted to Anadolu Agency on Thursday.

“The important thing is I am trying to create alternative ways to boost the yield and also raise hay prices. Then I heard about headset experiments in Russia and decided I wanted to try this no matter what. So I analyzed them for at least ten days and found out that both the quality and amount of the milk increased.”

Noting that, Izzet was aware of the environmental factors affecting milk production.

He said to Al-Jazeera.

“Our cows usually give 22 liter’s of milk daily. The average milk amount they give right now with VR headsets has reached 27 liter’s. They mostly watch a green pasture, which gives them an emotional boost. Another good thing is, they are less stressed now.”

He also said he has ordered more headsets (over 10).

“The Russians have used headsets on both eyes, but we are trying with one eye experiment. We are also using classical music.”

Give Your Thoughts on All The Latest in Tech

HackerNoon has built a custom Slack app called Slogging to publish conversations about how technology is infiltrating everything! Join us on Slogging to give us (and the world) your two cents on all the emerging technologies of today.

Laughter is good for health

It’s already reached the bedroom, so why not

The future worries me.

VR Mission: Leave No One Behind