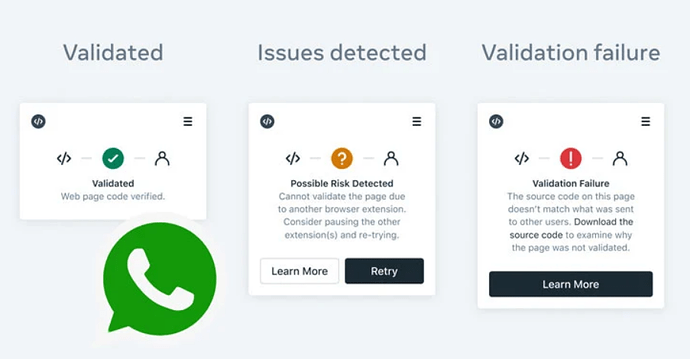 Meta Platforms’ WhatsApp and Cloudflare have banded together for a new initiative called Code Verify to validate the authenticity of the messaging service’s web app on desktop computers.

Available in the form of a Chrome and Edge browser extension, the open-source add-on is designed to “automatically verif[y] the authenticity of the WhatsApp Web code being served to your browser,” Facebook said in a statement.

The goal with Code Verify is to confirm the integrity of the web application and ensure that it hasn’t been tampered with to inject malicious code. The social media company is also planning to release a Firefox plugin to achieve the same level of security across browsers.

The system works with Cloudflare acting as a third-party audit to compare the cryptographic hash of WhatsApp Web’s JavaScript code that’s shared by Meta with that of a locally computed hash of the code running on the browser client. 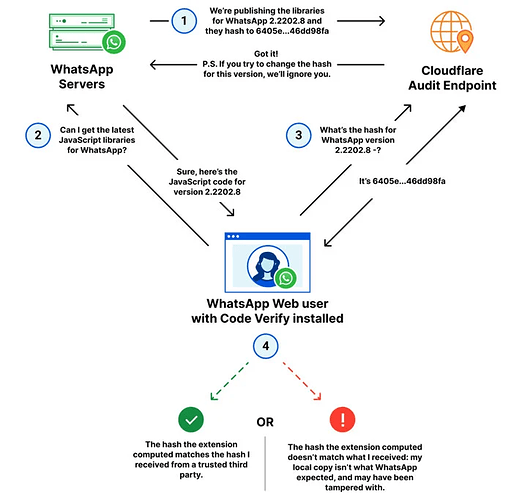 Code Verify is also meant to be flexible in that whenever the code for WhatsApp Web is updated, the cryptographic hash value will be updated automatically in tandem, so that the code served to users is certified on the fly.

WhatsApp, in a separate FAQ on the latest security feature, emphasized that “the extension won’t read or access the messages you send or receive, and we won’t know if you have downloaded the extension.” The add-on will also not log any data, metadata, or user data, and doesn’t share any information with WhatsApp, it noted.

“The idea itself — comparing hashes to detect tampering or even corrupted files — isn’t new, but automating it, deploying it at scale, and making sure it ‘just works’ for WhatsApp users is,” Cloudflare said.

You know the most shittest company alive is Facebook,

They don’t take a step back to trace you, collect information & many times ask for original Ids from you. One of their problem now is Whatsapp.

You know about Whatspp Web, when you connect it, they saved the logs & many files of Whatsapp in your computer, sometimes in Gb’s y? I have found and deleted that files many times. You might be thinking Whatsapp web, Just connect; nope, it’s not even whatsapp software which we can say store data; but a web connector storing so much amount of data.

As a Marketer, i’m gonna tell you; with Facebook, you can target to a person who just bought from nearby store like Walmart or bought a shampoo bottle on Amazon. This can be through things and activites you share or in other ways they do it; We can target them to a pin-point location & demographics etc Tht’s insane on how much data they collect from you. Always on facebook, turn-off trackers in settings; or don’t use it for better, you have alternatives; nothing is free in this world, for facebook you are the product